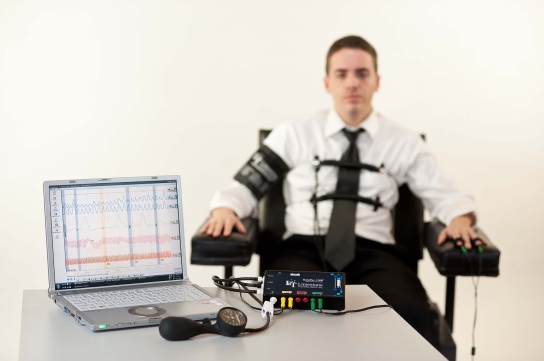 When Bill Wegerle came home to find his wife murdered in their bed, his world fell apart. To make it worse, he became the prime suspect in her murder and, without an alibi, no one would believe his innocence. In a bid to clear his name, he agreed to a police polygraph test, but failed. Twice. By the time he was finally exonerated, in light of new evidence, it was too late – Bill and his children had spent twenty years living as social outcasts, damned by the very machine that should have saved them.

This might seem to be an anomalous case, but it’s not – time and time again, polygraphs have shown themselves to be undeserving of the nickname ‘lie detector.’ Take the case of Ana Montes, a Cuban spy who successfully worked at the US Defence Intelligence Agency for over 25 years despite their regular polygraph tests. Or Floyd Fay, who was sentenced to life in prison following a failed lie detector test, and only released when new DNA evidence came to light.

The problem lies in how the test works: it is based on the assumption that when we lie, we become increasingly emotionally aroused. The polygraph test measures changes in heart rate, blood pressure and skin conductance, which are the body’s physiological responses to arousal, so when an interviewer asks control questions followed by case-relevant questions, the two physiological responses can be compared. An ‘innocent’ person shows more of a response to control questions, things unrelated to the crime that someone is likely to lie about, such as “Have you ever stolen anything?” A ‘liar’, on the other hand, shows more of a response to case-relevant questions.

However, there are many reasons why an innocent person might show a heightened response to the case-relevant questions. They may be scared their answer won’t be believed, or know something about the crime without having committed it. In fact, if they tell the truth to the control questions, they will have an unexpectedly low control response, making them look like liars.

As for the guilty person trying to beat the test, relevant techniques are easy to find. These include heightening responses to control questions through physical pain or mental stimulation, or lowering responses to relevant questions through meditation. Floyd Fay spent his time in prison reading up about polygraph tests and coaching his fellow inmates to beat the test. With just 15 minutes of training, 23 out of 27 prisoners could beat it.

What’s more, the test results are analysed by the polygraph operator, making them vulnerable to subjective errors. In one such case, David Westerfield of San Diego failed a polygraph test after the examiner decided his alibi was unbelievable and took measures to ‘compensate’ – deviating from the agreed questions, raising the room temperature, and adjusting the machine sensitivity when the readings were too low.

Pre-existing biases can also sway the result, as the American investigative news programme 60 Minutes cleverly demonstrated. Using a photography magazine as a front, it hired four polygraphers to investigate an alleged case of theft. Each examiner was given the same four suspects to interview and, before the tests started, told that one of the four was most likely to be the thief. Despite the fact that this hunch was different every time, the tests of each of the four polygraphers ‘proved’ their own hunch-suspect was the thief. Of course, there had been no theft, and all four suspects were actors – the polygraphers had simply looked for reasons to justify their suspicions. Can we trust that, in a real-life situation, when the person being tested is already under suspicion, these biases won’t re-emerge?

Given these problems, it’s not surprising that a 1997 survey of psychologists estimated the polygraph’s accuracy to be around 61% – not much better than chance. If we consider the case of a company with 10,000 employees, ten of whom are spies, then six spies and 3,896 innocent people would be accused of spying. Such a result is next to useless. Yet in America, 17 states allow polygraph evidence in court, and private employers can polygraph test their employees as part of an internal investigation. In the UK, the government plans to introduce mandatory polygraph testing for sex offenders in the hope that this will reduce re-offending rates.

So, what’s the reason for this continued polygraph use? In a word: confessions. If a person believes that they have failed the test (this is often suggested to them by the interviewer), then they are more likely to confess to the crime. But consider the implications of this; because a small number of cases yield results, wrongful convictions and pardons seem like acceptable ‘collateral damage.’ This is a seriously unethical way to approach crime solving. What’s more, it means that institutional lying becomes a legally acceptable way to get the truth.

Yet the most dangerous problem is this: the confession approach only works if the person believes in the accuracy of polygraph tests. It’s hard to get a confession from someone who knows you’re bluffing. And how long will it be before people start to beat the test? Given the sheer volume of information out there about polygraphs, it is only a matter of time. If we blindly trust a machine that fails in nearly 40% of cases, then why not also allow juries to convict someone on the basis that he or she ‘looked a bit shifty’, rather than considering the evidence that proves it ‘beyond reasonable doubt’? Better still, just flip a coin. Overall you’re bound to be right half the time. It’s time to expose the fact that lie detectors do not actually ‘tell the truth, the whole truth and nothing but the truth’ but only someone’s interpretation of the truth.

This article originally appeared in Issue 23 of I, Science – available here.

One thought on “Do polygraphs tell the truth?”