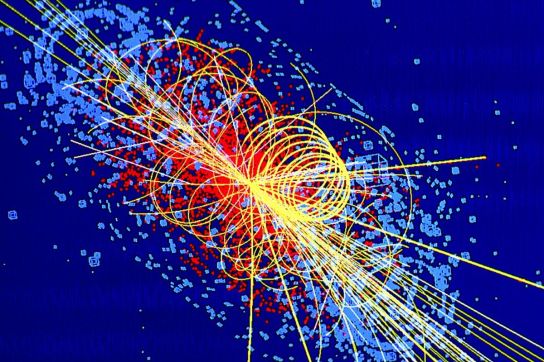 For something so hard to find, the Higgs boson has been absolutely everywhere for the last few years. But despite it trending on Twitter, and even having its own iPhone app, most people still ask, “What exactly is it?”

The Higgs boson is, at its simplest, an elementary particle: a particle that cannot be broken down into anything smaller. Such particles are the building blocks of the universe, and a number of them are already known: 12 fundamental fermions (such as electrons), which make up matter, and 4 fundamental bosons (such as photons), which give rise to forces.

But we can also think of these particles in a different way. Imagine a weather map where wind speed has been mapped out: each arrow on the map is a point in space with a known ‘amount’ of wind speed, and where that value is not zero, we say there is wind. We can do the same thing for particles: every point in space can be assigned an amount of ‘electron-ness’, and electrons are present when this is more than zero. This all-present potential for ‘electron-ness’ is called an electron field, and in a similar way, the Higgs boson is an excitation in the universal Higgs field.

Despite all the hype about the Higgs boson, it’s the Higgs field that’s so important for physicists because it’s how particles get their mass. Particles that interact strongly with the Higgs field gain a lot of energy from it; energy that we interpret as mass, thanks to Albert Einstein’s E=mc2 equation.Without this process, the equations describing particle  behaviour cannot explain why most elementary particles have mass.

So why are we chasing the Higgs boson? Because we can’t measure the Higgs field
directly: we need to find the Higgs boson to prove the field exists. This search happens at the Large Hadron Collider at CERN, where ‘bunches’ of protons are accelerated to 99.9999991% of the speed of light, before colliding up to 600 million times per second. The elementary particles (such as gluons) that make up the protons then have enough energy to interact with each other, and can produce a Higgs boson.

Unfortunately, the Higgs boson is so massive that it immediately turns into other, lighter particles, meaning we can’t just look for it in the results of the collision. But we can predict what it should decay into – and if we see that same ratio of particles in the detector, then we may have made a Higgs boson. In fact, lots of other pathways could go to make those particles, and by chance it could be the same ratio, but if we run enough experiments, and
the same results keep coming up, then we can be more confident that there’s a Higgs
boson involved.

And that’s what happened: in 2012, after 4 years of running trillions of collisions,
CERN announced that they had “probably” found a Higgs boson, with only a 1-in-3.5
million chance that the results were just down to chance.  But this is just the beginning – our standard model of physics doesn’t tell us where gravity comes from, so if the Higgs
boson fits the model exactly, we haven’t got  any new information to point us in the right
direction. If it does something unexpected, it could help us find the holy grail of physics: a theory that describes all the forces in the universe.

Perhaps the Higgs deserves the title ‘God Particle’ after all.

This article originally appeared in a special Outreach Issue of I, Science that was distributed to secondary schools; an online version is available here.